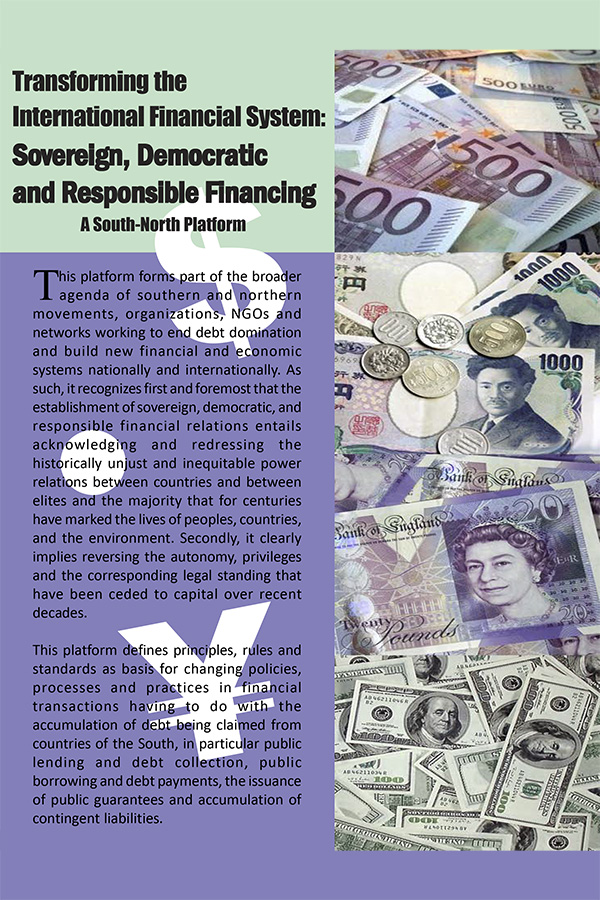 This platform forms part of the broader agenda of southern and northern movements, organizations, NGOs and networks working to end debt domination and build new financial and economic systems nationally and internationally

As such, it recognizes first and foremost that the establishment of sovereign, democratic, and responsible financial relations entails acknowledging and redressing the historically unjust and inequitable power relations between countries and between elites and the majority that for centuries have marked the lives of peoples, countries, and the environment. Secondly, it clearly implies reversing the autonomy, privileges and the corresponding legal standing that have been ceded to capital over recent decades.

This platform defines principles, rules and standards as basis for changing policies, processes and practices in financial transactions having to do with the accumulation of debt being claimed from countries of the South, in particular public lending and debt collection, public borrowing and debt payments, the issuance of public guarantees and accumulation of contingent liabilities.

View in full screen
Refresh page if preview is blank

The financial as well as economic system must be profoundly transformed

The current economic and financial crisis and the debt crisis that has plagued Southern countries for decades have their roots in colonial rule and a fundamentally flawed system that is driven by capital accumulation. This system gives primacy to the pursuit of profit and is based on the exploitation of people and environment.

Economic and political power relations between North and South countries, between global institutions of capital and the people of the South has given rise to the illegitimate debt. It also involves the collusion and collaboration of South elites and asymmetrical relations among south countries. It also stems from the conflict between the dominant economic system and ecological justice and environmental rights.

The financial system must be transformed according to the following integral principles:

Transforming the financial system and establishing an alternative economic order should begin with preventing further damage, redressing the injustices that it has spawned, reversing the massive net outflow of financial resources from the South to the North, stopping loan-pushing by governments and financial institutions as a means for pursuing their economic, geopolitical and military interests, and ending the reliance and "dependence" of South governments on borrowing and aid.

Thus we emphasize the critical importance of the following demands, especially in the face of multiple crises.

Standards and Rules for Lending and Borrowing and Related Financial Transactions

To prevent further build up of illegitimate debt and move us forward in building a new international financial system – far reaching and comprehensive changes in lending and borrowing and related transactions are needed based on the standards and rules outlined below:

A. ON PUBLIC LENDING and RESPONSIBILITIES and OBLIGATIONS of LENDING GOVERNMENTS and INSITUTIONS

The history of the public debt crisis in the South since the 1980s has shown that northern governments, international financial institutions and private banks and financial companies bear major responsibility for the accumulation of illegitimate and unsustainable debt. Lenders should uphold the following obligations and standards, and regulatory mechanisms on financial transactions should be established along these lines.

B. ON PUBLIC BORROWING and DEBT PAYMENTS: RESPONSIBILITIES and OBLIGATIONS of BORROWING GOVERNMENTS

Governments of the South also have responsibility in the creation of the debt problem and should be held accountable to their citizens.

In situations where borrowing becomes necessary, whether externally or internally, governments should establish solid legal and institutional borrowing policies guided by principles of sovereignty and democracy and the following rules, standards and obligations.

C. ON LOAN CONTRACTS AND JOINT RESPONSIBILITIES OF LENDERS AND BORROWERS

International financial markets have severely impacted borrower countries through creating financial instability, fluctuation of exchange rates and expropriation of national sovereignty in regulating national economy. Finance should be subordinated to support real economy and not speculative processes with severe impacts on the economies of Southern countries. Global economy should be definancialized and subordinated to binding rules.

The international financial architecture should be profoundly transformed in order to introduce a fair and stable monetary system re-establishing national monetary sovereignty.

In this context developing countries should be put in the conditions to promote state-backed financial operations – including issuance of treasury bonds. Whereas these operations will take place at regional and international level the primary aim should remain the mobilization of resources at national level towards social and public purposes by retaining the maximum democratic control possible and adequate safeguards.

The Issuance of bonds:

Public guarantees and contingent liabilities cover have led to crushing debt, while the beneficiary firms have ripped maximum profits from Southern countries.

Export Credit Agencies play a major role in the extension of public guarantees and the accumulation of contingent liabilities by providing guarantees to private firms for their investments in South countries and requiring counter-part guarantees from South governments.

To protect the sovereignty and resource of states and their peoples, there should be effective implementation of the following principles, rules and guidelines:

INTERNATIONAL and REGIONAL NETWORKS and ORGANIZATIONS