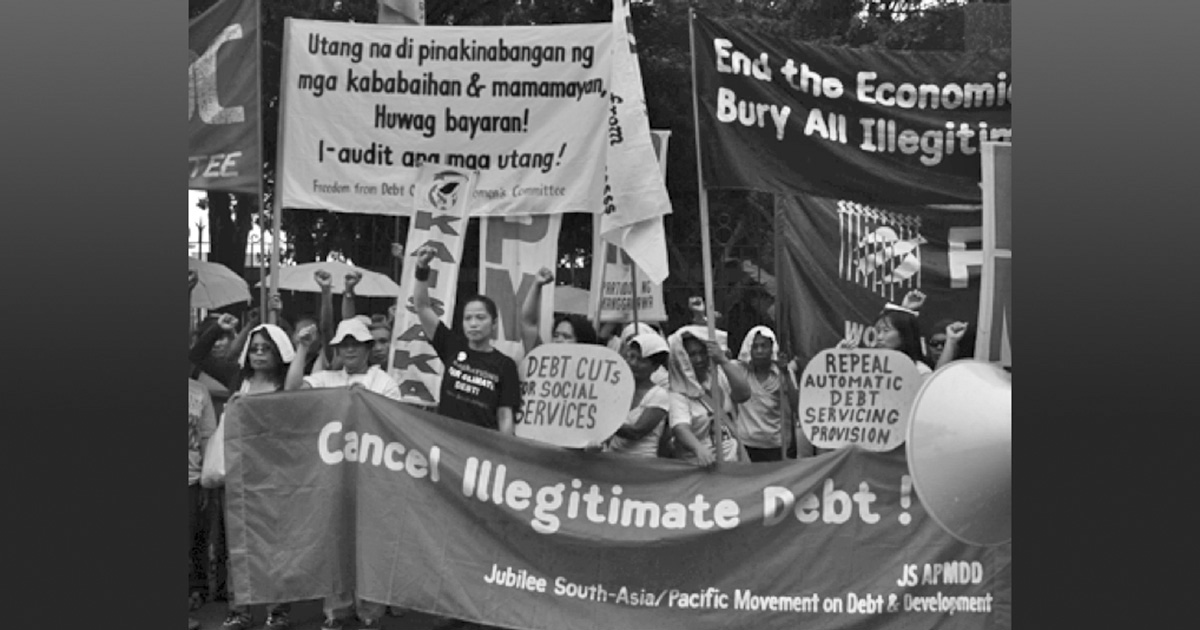 The Illegitimacy of Debt

The debt problem must be understood in its historical political and economic context. And, such an understanding points to the illegitimacy of the debt as a whole and the system that has spawned it. 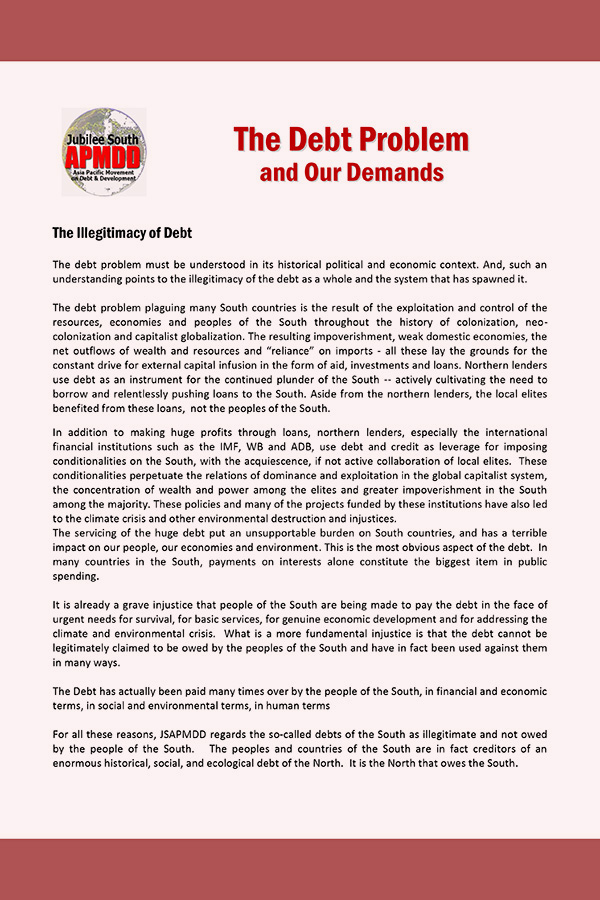 The debt problem plaguing many South countries is the result of the exploitation and control of the resources, economies and peoples of the South throughout the history of colonization, neocolonization and capitalist globalization. The resulting impoverishment, weak domestic economies, the net outflows of wealth and resources and "reliance" on imports – all these lay the grounds for the constant drive for external capital infusion in the form of aid, investments and loans. Northern lenders use debt as an instrument for the continued plunder of the South – actively cultivating the need to borrow and relentlessly pushing loans to the South. Aside from the northern lenders, the local elites benefited from these loans, not the peoples of the South.

View in full screen
Refresh page if preview is blank

In addition to making huge profits through loans, northern lenders, especially the international financial institutions such as the IMF, WB and ADB, use debt and credit as leverage for imposing conditionalities on the South, with the acquiescence, if not active collaboration of local elites. These conditionalities perpetuate the relations of dominance and exploitation in the global capitalist system, the concentration of wealth and power among the elites and greater impoverishment in the South

among the majority. These policies and many of the projects funded by these institutions have also led to the climate crisis and other environmental destruction and injustices.

The servicing of the huge debt put an unsupportable burden on South countries, and has a terrible impact on our people, our economies and environment. This is the most obvious aspect of the debt. In many countries in the South, payments on interests alone constitute the biggest item in public spending.

It is already a grave injustice that people of the South are being made to pay the debt in the face of urgent needs for survival, for basic services, for genuine economic development and for addressing the climate and environmental crisis. What is a more fundamental injustice is that the debt cannot be legitimately claimed to be owed by the peoples of the South and have in fact been used against them in many ways.

The Debt has actually been paid many times over by the people of the South, in financial and economic terms, in social and environmental terms, in human terms.

For all these reasons, JSAPMDD regards the so-called debts of the South as illegitimate and not owed by the people of the South. The peoples and countries of the South are in fact creditors of an enormous historical, social, and ecological debt of the North. It is the North that owes the South.

A close examination of specific and immediate circumstances, nature and consequences of the debts claimed from the South would reveal that many of these debts are illegitimate based on the following grounds:

Many debts violate the following basic assumptions of debt contracts:

People and societies have a collective or community sense of justice & fairness, a sense of what is right, what is for the common good. Many debts violate widely held common values and principles which include, among others:

Harm to people, economies and environment

Many debts have clearly caused harm to people, economies and environment, including:

Conditions that lead to Illegitimacy

The specific conditions that lead to illegitimacy are found in the following:

The perspective of illegitimacy of debt and illegitimate debt lays wide and more solid grounds for demanding debt cancellation and repudiation as a matter of justice. It points to what has to be transformed and the alternatives to be established in the policies, practices, processes, power relations and structures of the economic system (national and global), as well as to broader political & economic changes.

Transforming the financial system and establishing an alternative economic order should begin with preventing further damage, redressing the injustices that it has spawned, reversing the massive net outflow of financial resources from the South to the North, stopping loan-pushing by governments and financial institutions as a means for pursuing their economic, geopolitical and military interests, and ending the reliance and "dependence" of South governments on borrowing and aid.

Thus we emphasize the critical importance of the following demands on debt and the financial system, especially in the face of multiple crises.