As the Asia Clean Energy Forum (ACEF) 2018 drew to a close today, climate justice groups reiterated their call for a quick end to coal and other fossil fuels and a fast transition to 100% renewable energy. 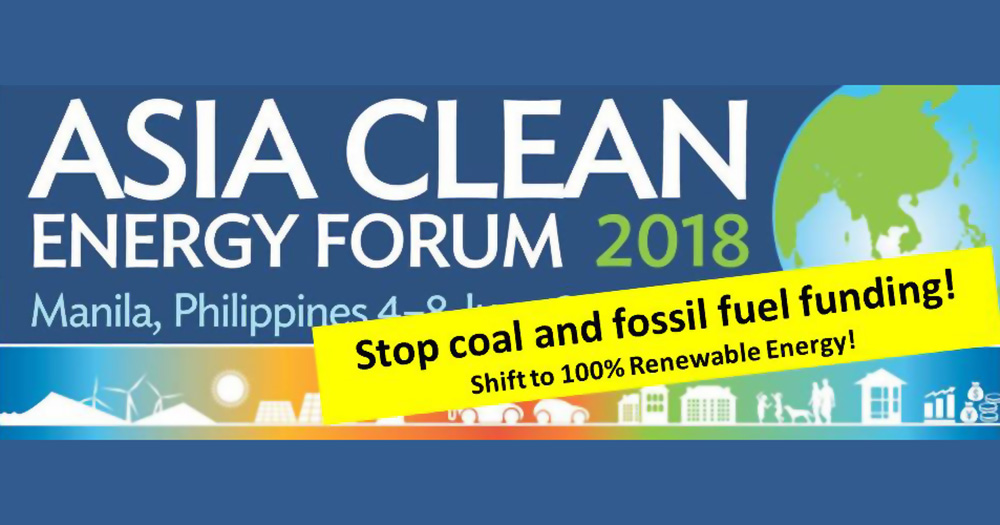 As the Asia Clean Energy Forum (ACEF) 2018 drew to a close today, climate justice groups reiterated their call for a quick end to coal and other fossil fuels and a fast transition to 100% renewable energy.

The groups challenged the Asian Development Bank (ADB), convenor of the annual ACEF, to stop its financing of coal and fossil fuel based power projects. “The limits that ADB adopted in 2009 to its coal energy investments in is far from enough, especially amidst the rapidly worsening climate crisis,” said Ian Rivera, National Coordinator of Philippine Movement for Climate Justice. He pointed out that “despite ADB’s commitment to invest $2 billion a year for clean energy, the bank persists in financing dirty energy with its funding for coal alone amounting $10.735 billion from 2009-2017. “It’s high time that the ADB revisit its Energy policy. If it is truly committed to avert climate catastrophe, the ADB must put an immediate stop to investments in coal and all fossil fuels,” he added.

Melvin Purzuelo of Aksyon Klima challenged public and private investors gathered at the Asian Clean Energy Forum to fast-track the transition to 100% Renewable Energy. “Climate change-related disasters have been wreaking havoc in the Philippines and many parts of the world. Extreme weather events are becoming stronger and more frequent. The use of coal and fossil fuels is a major of the intensification of the crisis. The world needs to shift to 100% renewable energy as quickly as possible. The current pace of the development of renewable energy is much too slow.

Aaron Pedrosa, Secretary General of Sanlakas, said “All around the world, people are rising and mobilizing to end the era of coal and fossil fuels. We are starting to see the results of our efforts as financial institutions are committing to divest from coal, as a start. The Asian Development Bank is definitely not a leader in the push for clean and renewable energy, with its push for “clean coal” and its persistence in funding fossil fuels.”

The Asian Peoples Movement on Debt and Development, a regional alliance of citizens groups from more than 10 countries in Asia, emphasized the urgency for all investments and initiatives to align with goal expressed in the Paris Agreement of keeping global temperature rise to below 1.5 degrees Celsius. “The 1.5 degrees threshold is not just a number. It represents the fate of 7.6 billion people living in the planet, and the earth’s eco-system. Behind this number are profound life-changing questions of how many people and communities will survive, how many islands will sink, who and how many will have food and shelter, what new diseases will threaten life. Scientists have already said that keeping temperature rise to below 1.5 degrees requires that the world fully de-carbonize not later than 2050. That means we must complete the shift to 100% renewable energy way before 2050. It is a huge transformation and we have not time to lose. Financing of new coal and fossil fuels must stop now. There must be a swift phase out of all existing coal and fossil fuel projects.”

[This article is also published on APMDD’s FB page.]